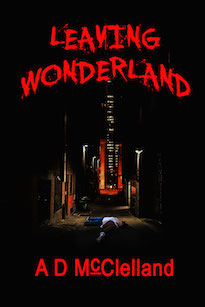 She lay dead at his feet and seeing her crumpled body limp on the cobblestones under the night sky, arms and legs at disturbing angles, sent a rush of sorrow through the core of his chest. Discordant church bells echoing through the manmade canyon between the old brick buildings in the narrow alley seemed apropos to the sadness that choked him. Yet something was wrong.

It was her hair he decided as he tilted his head studying her, ignoring the growing awareness of pain in his left shoulder. Her hair wasn't supposed to be that long nor that colour. She was supposed to have shorter black hair, not long and brunette. Although a flash of her as a blonde scampered across his memory and was gone as quickly as it appeared.

And she wasn't supposed to be dead. It was impossible that she was dead, and a small helpless sound vibrated his throat as he remembered that he loved her. He couldn't remember her name, but he knew that he loved her.

The pain in his shoulder was getting worse and was now matched by its twin in his left hip.

He grimaced as the pain in his hip lanced across his lower back, the arhythmic tolling of the bells annoying him now as he searched his memory for her.

The last thing he remembered was the dream; running across a grassy meadow in the moonlight, chasing a playful rabbit.

Rabbit. Was her name Rabbit?

He shook his head; that was wrong.

In the dream Rabbit could talk.

And he ran as fast as he could as Rabbit pulled him along by his jacket cuff, her long legs sleek and sure in the darkness, her feet light on the grass. His own feet clumsy and heavy as he ran, his legs stiff and weakening quickly. He was about to beg her to slow down when she fell.

"Who are you?" he whispered to the dead girl, lowering himself painfully to one knee his hip screaming in shattering agony, his hand trembling as he reached out to touch her.

There was blood on the back of his hand. It was scraped, a bruise forming, purples emerging through the seeping blood. Behind him the church bells were growing louder, drowning out the shush of traffic passing on the streets at either end of the alley. This was becoming surreal, like a bad European student art film.

The skin of her cheek was pale, as soft as silk and still warm.

"Who are you?" he asked again, pleading, "I can't remember." and he felt tears begin to well in his eyes, blurring his vision of her. How could he not remember her name?

"Run." said Rabbit in a barely audible whisper that caused him to pull his hand back, startled.

The girl's lips, slightly parted, hadn't moved but the voice had come from her. Then he realized that lips didn't have to move to form that word — it was all in the tongue and the breath.

"Run!" Rabbit hissed louder and he felt a cold rush trill up his spine and over his scalp.

He turned to see two men clamouring down the old fire escape on the building behind him, their pounding feet setting the metal rungs to sing like badly pitched bells. One of the men clutched a pistol with a comically fat extended barrel.

Not a barrel — a silencer.

They were coming to kill him.

He looked down at the girl, his chest hitching at the thought of leaving her that way, but he was alive and needed to stay alive.

"I'm sorry." he whimpered, and ignoring the pain in his left hip he rose and ran down the alley away from the men, zig-zagging to make a poorer target. He heard the throaty 'chunk' from behind him and saw the limestone dust kick up from a cobblestone where the bullet skipped.

They were definitely trying to kill him.

When he reached the end of the alley he didn't slow, just changed direction and shot past the edge of the last building onto a broad sidewalk. At the end of the block he saw the intersection was wide, and knew there were four lanes for each crossing street, both one way; one northbound, the one he was on westbound.

He had no time to think. He just ran, and running wondered why the term 'tradecraft' had echoed in his mind.

As he rounded the corner and dodged across the street cutting through oncoming traffic, he was relieved to see a large Prevost tour bus parked in the loading zone in front of the hotel, disgorging a large cluster of asian tourists, all milling about as the driver unloaded their suitcases from the open belly of the bus.

When he hit the sidewalk he slowed to a brisk walk, his hip joint feeling like it was grinding crushed gravel. He bypassed the tourists and bounced up the steps to the lobby and was inside within seconds of rounding the corner.

Walking through the semi-crowded lobby he kept his speed up and looked straight ahead as though he was late for a rendezvous. The lobby was golden and held in disorienting bondage by floor to ceiling mirrors etched with the hotel chain's logo. He used the mirrors to check behind him for men with guns and didn't see any, but even still there was a knot between his shoulder blades where he imagined the bullet would hit him if there was.

Why did that word keep slipping into his mind?

He felt vulnerable in the lobby even though he didn't appear to be followed and when he exited out the far doors to the other street the cool night air on his face made him feel sharper, slightly more in control.

His hip still screamed in complaint as he jogged half a block south then half a block west and found the bar that he knew would be crowded.

Inside, deep into the bar, weaving around clusters of people talking over each other to be heard, then up the circular spiral staircase to the second level where people went for quieter conversations. He found an empty table meant for two and sat with his back to the wall. He could see the entrance and entire ground floor from where he sat, and finally allowed himself to relax, leaning sideways in his chair to take the pressure off his left hip and hide his bloody right hand.

Two tables down a loud woman sat with a quiet man, her dress too tight and his suit cheap and off the rack, both trying to impress each other.

"Hi, my name is Matthew, What can I get you?" the young man appeared at his side without him noticing. Pride pin, perfect shoes and hair, closely shaven, a hint of lip gloss.

"Vodka tonic, lime wedge." he answered before he could think about it.

"Would you like to see our menu?" Matthew asked.

"No, just the drink. Thank you." he said, then flashed on panic as Matthew walked away; did he have any money? He searched his pockets. No wallet, no keys, no cash in his jeans. Into his jacket pockets; a pack of cigarettes, a Zippo lighter and two books of matches; in the other a numbered stub like they sold at Legions for half & half draws or meat raffles. He didn't smoke, that he knew, and he doubted he'd been drinking in a Legion — why, he didn't know. One thing he did know was that it wasn't his jacket.

He reached into the inner breast pocket and found an envelope, took it out and opened the flap that had never been sealed.

Nine crisp hundred dollar bills and four used twenties. He slipped one of the twenties into his front jeans pocket and tossed another on the table, then put the envelope back.

Whoever he took the jacket from would be angry, have to return to his handler for more operational cash and explain he let it be stolen. People in the trade didn't last long being sloppy like that.

He didn't know where these words arose from, nor to what lexicon they belonged. He dug deeper into his memory and found something else missing that made his blood run cold. Not only couldn't he remember the dead girl's name, he couldn't remember his own. He felt suddenly disoriented, dizzy, the murmuring crowd below becoming irritatingly loud, the laugh of the woman two tables over like sheet metal running through a bandsaw.

It was Matthew again setting down his drink and picking up the twenty, digging through a pouch on his tray for the change.

"How did you hurt your hand?"

"I tripped and scuffed it on the sidewalk." he lied.

"I've seen you before." Matthew said, "At The Depot with that cute trap."

"You know." Matthew said it like he should, "Any plans for tonight?"

"No. Just staying alive." he answered and Matthew laughed.

"Well, I'm heading up there after I get off work at ten. If you're around, I'll see you." then walked away, giving him a lingering smile.

Matthew pulled out his cell phone and woke it up.

"Nine, thirty-five." he said and smiled again then winked as he walked away.

He lifted his vodka tonic and drank half of it, then set it down and just breathed. He felt the warmth of the vodka spread across his chest and the pains in his hip and shoulder eased a little as his muscles relaxed. Did alcohol always hit him this hard?

He needed to take stock, become aware of his assets. He had nine hundred and sixty dollars, someone else's jacket and Zippo lighter. Downside; he was a target for someone trying to kill him — someone who'd already killed (Rabbit) the girl, and he couldn't remember who he was. But Matthew seemed to know something about him. A place where he went with a girl.

Leaving his change for a tip, he went into the second floor mens' room, relieved himself, then washed his hands at the sink, careful not to reopen the scrapes. Then he wrapped his wounded hand in a paper towel and squeezed it and studied himself in the mirror.

The eyes that gazed back at him were familiar but the hair colour wasn't. His hair was darker than it should be. Ash blond would be a better fit, and longer — shaggy and longer.

Available at these bookstores or on Amazon
Trailer