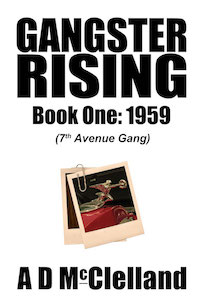 (When Girls of Gold and Porcelain Fall from the Sky)

Donny had a large family. I know he had three brothers, but to this day I don't know how many sisters Donny had. See, Donny's parents really believed in having lots of kids. When their youngest was born, the oldest was graduating high school.

Donny's family lived in a big house over on 6th Avenue, and this particular breed of house was called a 'three and a half storey' - the half storey being the attic where the oldest girls lived. The sleeping arrangements in Donny's house were assigned by age and sex. Everybody shared a room and the younger you were, the closer you slept to mom and dad. I guess it makes sense - as kids get older and lose their dependency and cuteness, parents start to push them away to prepare them for independence or maybe they just get sick of them when they become teenagers. So when you were a little Gabler, you slept in the bedroom next to mom and dad's, and by the time you were finishing high school you were bunking in the attic if you were a girl or the basement if you were a boy.

One day, Donny and I were watching television in their sunroom. Like Grandma's house, their sunroom was a converted porch and was the place the younger kids went to play when the weather was too crappy outside or if it was nighttime and mom and dad didn't want them underfoot. The place was littered with toys except for the pathway from the front door to the living room. The television itself was a cabinet style with big screw-on legs and rabbit ears on top and it was the only piece of furniture in the room. Donny's parents didn't watch it, so it was left out in the sunroom for the kids so when you watched television, you just sat on the floor and leaned against the wall.

What I didn't know at the time was that above the ceiling of the sunroom was a dead-space created by the hip roof over the first floor of the house. A lot of old fashioned houses had them, and some people used them as storage spaces. Like the one in Donny's house, most of these storage spaces didn't have floors, just open floor joists. The ceilings under them were just cedar strip lath and plaster and if you looked at them from above you'd see the strips of cedar with running globs of dried plaster pushed up from below when it was still wet. These plaster and lath treatments were just so you could have a ceiling underneath, they had no structural integrity at all.

So, as Donny and I were watching television, we could hear three of Donny's sisters playing upstairs. It didn't occur to us at all that they were playing in the dead-space right above us.

All of a sudden the ceiling exploded, raining down split cedar strips and plaster and down comes Donny's little sister Carrie in a cloud of plaster dust and - whammo - she hits the edge of the television knocking it sideways and then hits the floor hard. She'd tried walking on the plaster and lath ceiling and broke through it like thin ice on a pond. I guess she was used to walking on it when she was little - not that she was overly big then - but the few pounds she'd put on tipped her weight past the threshold of what the bone dry plaster and lath could bear.

"Holy shit!" Donny lets rip and we hear Donny's dad bellowing about 'the goddamned kids playing in the goddamned storage space after I goddamned told them not to goddamn play in there' as he comes stomping out of the kitchen in the back of the house.

Carrie was nine years old at the time and she sat there looking scared and hurt and bewildered. When our eyes met I felt a tug inside my chest and I had the urge to wrap her up and hold her. Instead I got up and knelt down beside her.

"Are you okay?" I asked and realized how stupid a question that was - she'd just fallen through a nine-foot high ceiling and hit a television set for Christ's sake. People always ask that question, though. I swear, you could have a railway spike sticking out of your skull and some asshole would ask if you were okay.

Carrie just looked at me all wide-eyes and slowly shook her head - it was as if she didn't want to move or talk much because she was holding the broken pieces of herself together and if she moved too much she might shatter and fall apart. She was holding her right arm up and when I looked at it I could tell it was broken between the elbow and the wrist - it kind of had an extra bend in it. It was already swelling and her hand was hanging limp at her wrist like a sock on a bedpost.

Carrie must have seen something in my expression because she turned and looked at her arm. I put my hand on her back and told her it was going to be okay as gently as I could. I saw her throat working as she stared at her arm, then she threw up into the lap of her baby blue shorts. I ignored the vomit in her lap and kept stroking her sweaty back, wishing I knew what to do to help her, but I was just a kid too.

Dad and mom and a couple older siblings arrived on the scene at that point so I was usurped of any caregiving duties I might have offered - not that I could have done much for her - so I sort of faded into the background and went back to Grandma's house as they bundled her up and took her to the hospital.

Two days later right after breakfast I went back to Donny's house and his mom told me that she'd just sent him to Louie's and he'd be back in a few minutes so I could wait inside for him. I asked her how Carrie was and instead of just telling me, she hollered for Carrie to come down because I was asking after her. I cringed and felt like hiding - it reminded me of old movies when young men would arrive at a girl's house with freshly-picked flowers and puppy dog eyes as they came 'a callin'.

Looking back now, it seems like a nice thing that a boy was concerned about a girl who'd gotten hurt, but back then when I was twelve I blushed and felt like a total idiot. I heard Carrie come bounding down from upstairs. She was such a tomboy it sounded like someone pushed a wooden crate full of bricks down the staircase. But there she was, smiling and sporting a thick white cast on her right arm from just above her elbow to her hand. There was a hole for her thumb and a bigger one for her fingers. Someone had been drawing little pictures on it and there were hand printed names of her family all over it.

"I got a cast." she said proudly in case I missed it.

"Will you draw something on it?" she asked hopefully and I saw that she had a brand new box of pencil crayons in her left hand. They had been purchased solely for the decoration of her cast.

"Sure." I said and we went out to the front steps where the light was good. I didn't mind at all because I was a pretty good artist even then.

When we were sitting on the front steps in the morning sunshine, I asked Carrie what she'd like me to draw and hoped it wouldn't be a horse - I hadn't mastered horses yet. She looked around and saw the roses her mom had in the front yard.

It just so happened that I'd practiced drawing roses from a 'how to' book I'd taken out of the school library the year before. I liked how you started with a centre and just drew the scalloped petals around it making them bigger and bigger until you were happy with it then added a couple dark green leaves to finish it off. I was planning to get a tattoo one day of a bloody rose and the words 'Born to Lose' under it. I thought that would be totally badass, and in my later years was glad that it was against the law for kids to get tattoos because that tattoo would have been complete lunacy.

"Red, silly." she said and I dug out the reds and an orange and a couple greens from the box.

Carrie plunked her casted right arm on my knee and sat in rapt attention as I found a blank spot right in the middle and composed her rose from the centre outward. I found out later that Carrie had reserved that centre spot for me when her family signed her cast and I wouldn't know the significance of that for ten more years.

I carefully drew each petal and added in orange highlights on the tips and used the deeper reds where they disappeared into the heart of the flower. When it looked finished I added the green leaves around it and printed my name in small letters curving them around one of the leaves.

When I lifted my head and looked at her in that moment, a magic bloomed around us - it was breathtaking and ethereal. She was looking down at her rose with eyes the colour of pale cornflowers, a winsome smile on her face, the corners of her mouth curling upward like delicate sideways question marks. I could see her eyes moving as she studied every part of the rose, every curve, every petal, and every leaf.

While I had been drawing it, I had become aware of the scent of her - the faint smell of the milk and cereal she'd had for breakfast, the soft earthiness of sweat from her hair when she leaned closer to watch me work, and over it all the clean smell clothes get when you dry them outdoors. And in that moment the morning sun was strong behind her and her hair was as fine as a spider's web and lit up golden like a halo. Her skin was pale and luminous, the morning light making her nose and eyelids look like she was made of fine porcelain. I felt like crying, she was that beautiful.

Carrie lifted her eyes then and looked at me and I saw the purity of something rare and precious in her gaze that would never fade from my memory. If I close my eyes today, I can still see those cornflower blue eyes and the tender innocence in their depths. Unaware that I was doing it until it was done, I leaned forward and gently kissed her on one pale cheek. Her eyes twinkled and her smile widened.

"Thank you." she said in a whisper as soft as the stirring of air through an open window on a fine spring morning.

I wouldn't realize it until years later that I had fallen deeply in love with her in that singular moment of magic, and it was a love I would carry in my heart for the rest of my days.

Available at these bookstores or on Amazon

"Masterful, gut wrenching storytelling."
"This story captures a time and place seen through the eyes of a 12 year old boy."
"A true writer, not just someone putting words on paper."